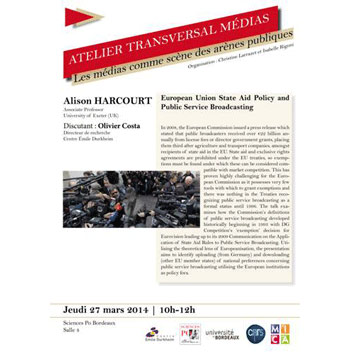 In 2008, the European Commission issued a press release which stated that public broadcasters received over €22 billion annually from license fees or director government grants, placing them third after agriculture and transport companies, amongst recipients of state aid in the EU. State aid and exclusive rights agreements are prohibited under the EU treaties, so exemptions must be found under which these can be considered compatible with market competition. This has proven highly challenging for the European Commission as it possesses very few tools with which to grant exemptions and there was nothing in the Treaties recognizing public service broadcasting as a formal status until 1996. The talk examines how the Commission’s definitions of public service broadcasting developed historically beginning in 1993 with DG Competition’s ‘exemption’ decision for Eurovision leading up to its 2009 Communication on the Application of State Aid Rules to Public Service Broadcasting. Utilising the theoretical lens of Europeanisation, the presentation aims to identify uploading (from Germany) and downloading (other EU member states) of national preferences concerning public service broadcasting utilising the European institutions as policy fora.